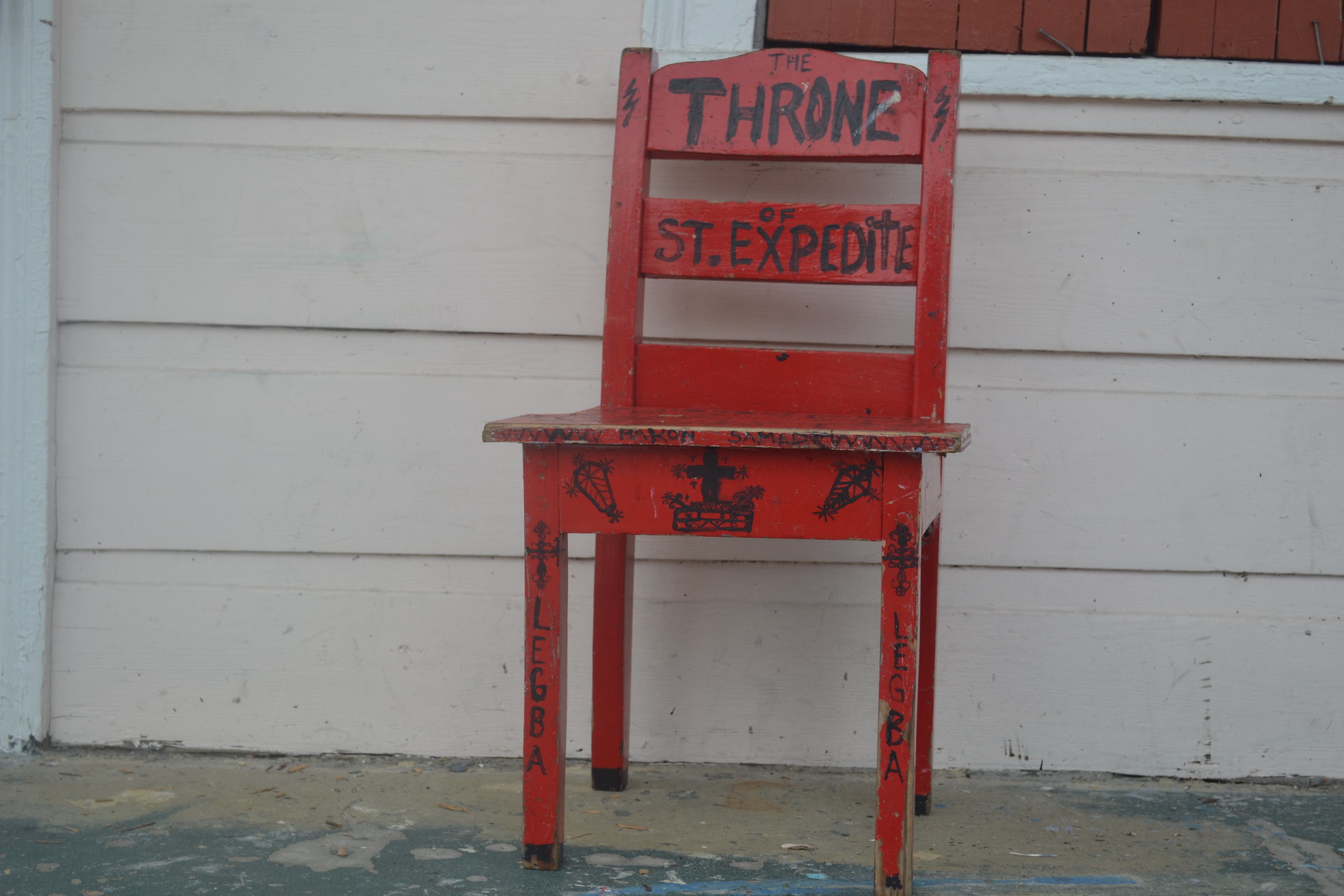 While walking back to my car, I spied this interesting chair on a porch in Treme. The text on the top of the chair says it is a throne of St. Expedite (St. Expeditus), a Catholic saint who is extremely popular in New Orleans and amongst practitioners of voodoo in the city. The rest of the chair is covered with “veves”, drawn symbols that represent the spirits (or “loas”) of voodoo. The names of two of the voodoo loa, Baron Samedi (the lord of the cemetery), and Legba (the guardian of the crossroads) are emblazoned on the seat and legs of the chair. The cult of St. Expeditus in New Orleans is interesting in its own right. Tradition says that Saint Expeditus was a Roman soldier killed by the Roman Empire for converting to Christ. Supposedly, when he decided to become a Christian, Satan tried to deter him in the form of a crow, which called out “Cras, cras”, which is the Latin word for “Tomorrow.” Expeditus is said to have replied, “No, I’ll become a Christian today”, and threw the crow to the ground, stomping it to death. Much of the iconography of St. Expeditus pictures him saying “Hodie” (“Today!”) while crushing the crow beneath his feet as it is saying “Cras!” (“Tomorrow!’). But how Expeditus made his way to New Orleans is less clear. The best (and funniest) story is that during the French colonial period of New Orleans, some statues of saints were shipped to a church in New Orleans, perhaps Our Lady of Guadeloupe. Most of the crates were labeled with the name of the saint whose statue was within, but the last one was stamped only with the French word “Expedite” (literally “Rush!”). According to this story, the people at the church assumed that Expedite was the name of the saint whose statue was within the box, and it was set up in the church with that name! At any rate, St. Expedite soon became a favorite saint with the older Marie Laveau, the voodoo queen of New Orleans. When she fixed love potions, or perhaps cast spells or curses, she taught her followers that prayers to St. Expedite would make everything happen sooner! And I’m reliably told that Expedite is much beloved in the Black Spiritual churches of New Orleans too.