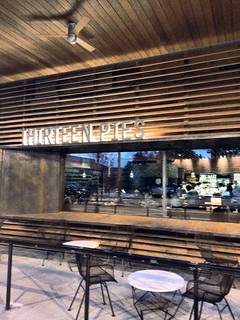 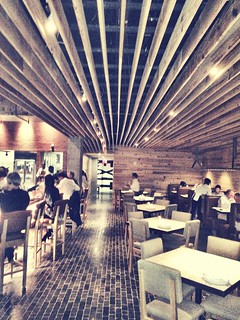 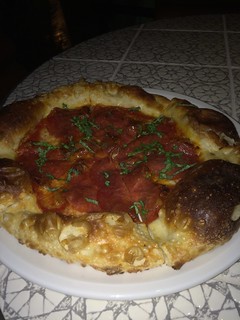 The number thirteen is anything but unlucky for pizza lovers in Atlanta, after the October 7th opening of Thirteen Pies Atlanta, the Buckhead location of a Fort Worth, Texas-based restaurant chain specializing in upscale pizzas and pasta. I was fortunate enough to try it on its second day open while I was in Atlanta for A3C, and I was for the most part pleased. Although there are a number of wood-oven pizza restaurants in most cities, Thirteen Pies has something of a unique twist, with a menu that features twelve specialty pizzas that are regularly available, and a semi-secret thirteenth that changes daily according to the fancy of the executive chef. Not that you cannot make alterations to customize your pizza, as I did, asking them to add applewood smoked bacon to their classic pepperoni, so I would assume that customers could request unique pizzas, as long as the ingredients are listed on the menu. Service was impeccable, and I was also pleased with the sleek, futuristic upscale look and feel of the establishment. Here’s hoping they make their way to Memphis.

My friend E-Rokk was down from Kalamazoo, Michigan visiting his children in North Little Rock, Arkansas, so I decided to drive over there to meet him and take them to lunch. I headed west on I-40, listening to recordings of three George Antheil operas (Venus in Africa, Volpone and The Brothers) which I had downloaded from an online website.
At Forrest City, I headed over to Highway 70 where there was a flea market, and while I didn’t find any Abraham and His Sons or Ike Noble and the Uptights records, I did find a stash of Black gospel 45s, some of them from Wynne and Marianna, Arkansas, and a few on the Designer and Messenger labels out of Memphis.
I decided to stay on Highway 70 through Brinkley (the flea markets there were rather disappointing), and when I got to North Little Rock, E-Rokk gave me directions to where he was staying and I went and met him there. Since his girlfriend had to work, we took the kids with us and headed to a pizza place I had found on my iPhone called ZaZa’s Fresh Salads and Wood-Fired Pizzas on Kavanaugh Boulevard in Little Rock. The restaurant featured salads and pizzas cooked in a brick oven, as well as gelato, espresso and cappucino. We all enjoyed our pizzas, got some gelato for dessert, and then headed downtown to President Clinton Avenue to Andina Coffee Roasters where I bought some pounds of coffee to take home.
The kids were intirgued by an African drummer who was playing a djembe in front of the River Market, and then they wanted to run into a playground along the riverfront, so we walked over there, and then across the river bridge over to North Little Rock and back.
I had to get back to Memphis, so after it began to get dark, I dropped them back off at the apartment in North Little Rock and headed back toward Memphis. At West Memphis, I had seen a Huddle House and so I decided to eat dinner there, but, when I got there, I found that it was newly built and had not opened yet. So, now wanting breakfast, I settled for the Iron Skillet truckstop in West Memphis, and found that the breakfast there was really quite good.
Widgets