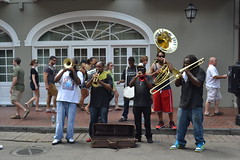 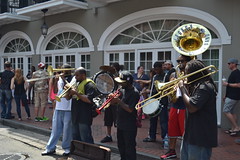 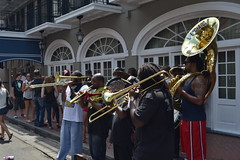 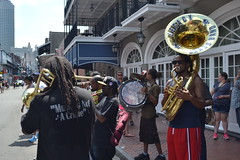 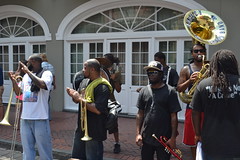 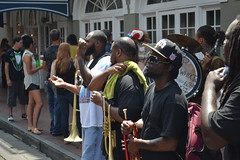 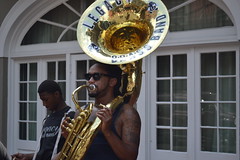 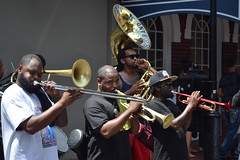 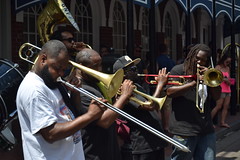 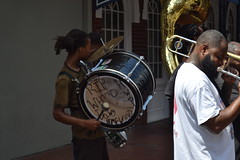 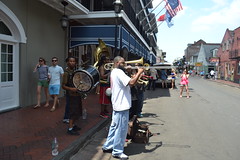 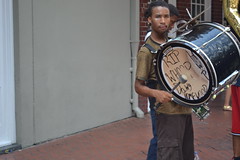 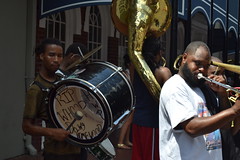 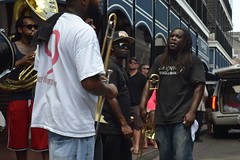 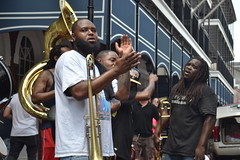 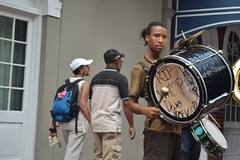 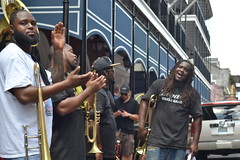 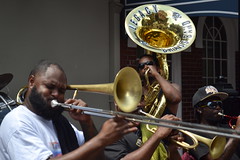 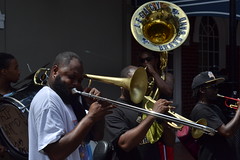 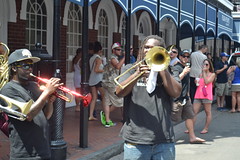 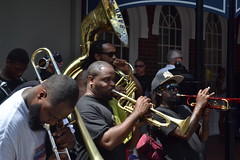 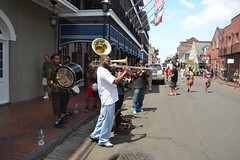 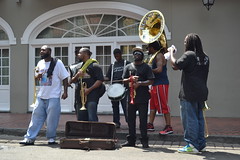 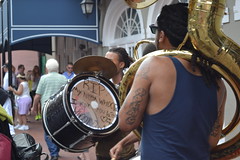 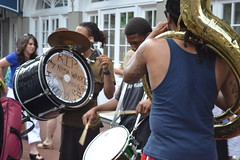 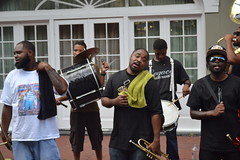 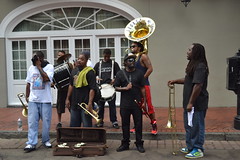 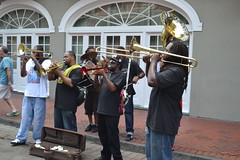 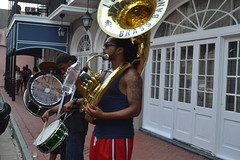 As I was walking down Bourbon Street near the Four Points by Sheraton hotel, I finally came upon what I had been looking for all afternoon, a brass band, although it wasn’t one I had heard of, but rather a new band called the Legacy Brass Band. One of the signs that New Orleans’ brass band scene is healthy is the constant appearance of new brass bands in the city, and the relative youth of the members. The Legacy proved to be a good-sounding band with good arrangements, and the ability to attract a crowd. I was impressed with the slogan on the back of their shirts, “Music Is Not A Crime”, a reference to the city’s recent crackdowns on live music that have made brass band appearances rarer outside of night clubs or second-line parades. Far sadder was a handwritten eulogy on the bass drummer’s drumhead, in memory of someone named Big Whoop who presumably was killed, an all-too-often occurrence in New Orleans. The good news is that brass bands and the opportunity to become musicians are significant lures to young men and significant deterrents to crime and violence.


Although the city of New Orleans put a stop to the tradition of brass bands playing in the first block of Bourbon Street near Canal, brass band music can still be heard in and around Jackson Square on some afternoons, played by a band known as the Jackson Square All-Stars. This band is geared to the out-of-town visitors, and therefore doesn’t play the hood-infused youthful style that used to prevail at Bourbon and Canal, but a lot of the members of this band are young musicians from the city’s best brass bands, including the TBC.

Bourbon Street can occasionally be serene and beautiful in its own way, 7/4/12

After the TBC Brass Band performed, an all-star band made up of members from various young New Orleans brass bands performed at the corner of Canal and Bourbon Streets, 7/4/12

The TBC (or To Be Continued) Brass Band has performed all over the country, and have been the subject of a documentary film called From The Mouthpiece On Back. But despite national and international acclaim and regular gigs at the Hot East Daiquiri Shop and the Blue Nile, they still take the time to perform at the legendary Canal and Bourbon Street corner where it all began. 7/4/12

One of the best places to catch authentic brass band music is the corner of Canal and Bourbon Streets beside the Foot Locker. Despite being in the French Quarter, this corner is close to the Iberville Projects, and here the brass bands play as much for their friends and relatives as they do for the tourists. There’s always a friendly vibe, good crowd interaction and some amazing dancing and/or second-lining. It’s also free, although the bands will pass the box around for donations. This is also the ground where many young bands get their start, from the To Be Continued to the Young Pinstripes. 7/4/12

The bass drum is like the foundation of brass band music. If you see somebody with a bass drum in New Orleans, that’s a really good sign. Follow him and see where he’s going, because there’s probably about to be some really good music going on.

After the end of the Los Hombres Calientes show, I walked up to Bourbon Street to head toward the Brass-a-Holics midnight show at Irvin Mayfield’s Jazz Playhouse at the Royal Sonesta Hotel, but now there was a brass band playing in the street at Bourbon and Canal, not the To Be Continued Brass Band, but the Young Fellaz Brass Band, and they were quite good as well.

To Be Continued Brass Band, playing for the crowd at their long-standing gig on the street at Bourbon and Canal. For many tourists, the TBC Brass Band playing on that corner is their first exposure to authentic New Orleans brass band music. With no cover charge or drink minimum, it is also one of the best live music deals in the city, and all donations go straight to the young people providing the music.