Bristerfest is a Memphis festival of music, art and film that raises money for Grow Memphis, a worthwhile organization that encourages neighborhood gardens in the inner city of Memphis. Formerly held at the Levitt Shell, Bristerfest moved this year to the former church-turned-performance loft called The Abbey at Cooper and Walker in the Cooper-Young neighborhood of Midtown, and featured two indoor stages and an outdoor stage over three days in May the weekend after Beale Street Music Fest. I was especially impressed by the rap and hip-hop line-up on Saturday night May 10, where C-Beyohn performed with the excellent reggae band known as the Chinese Connection Dub Embassy. They were followed by up-and-coming Memphis rap artist Tyke T backed by drummer Otis Logan and trombonist Suavo J of the band 4 Soul, and the young hip-hop duo S.O.U.L. that has been getting some attention locally over the last year. I must add that attendance seemed very good indeed for this year’s Bristerfest, and hopefully a lot of money was raised for Grow Memphis. 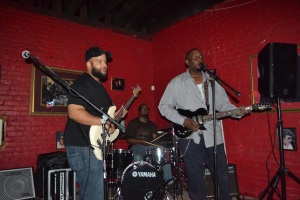 For those who missed the C3 Band concert last night, here is the bulk of it (minus the opening “I’ll Play The Blues For you, sadly), recorded with my iPhone 5S using the Rode Rec app, which I highly recommend.

With lots of conflicting options with what to do on my Friday night (the first in many weeks that I hadn’t either had a gig or been out of town), I wasn’t sure what I wanted to choose. My drummer homeboy Mike Mosby had one of his Locked and Loaded events going on, Bristerfest was kicking off in Cooper-Young, Eden Brent was at the Center For Southern Folklore, and the Clarksdale Caravan Music Fest was going on down in Mississippi. But when I saw that my homeboys in the C3 Band were going to be playing at West Alley BBQ in Jackson, Tennessee, I decided to drive up there, both to catch their performance, and to check out the barbecue, which my homeboy Courtney Brown (C3’s drummer) had said was really good.
West Alley BBQ proved to be something like a large juke joint, with two older men tending to oil drum cookers outside along the side entrance. The look of the place would not have been unfamiliar to people who know Ground Zero in Clarksdale, but there were some elements that seemed more in keeping with Red’s Lounge instead, although the place was much bigger. The pulled pork was delicious, just as I had been told, and the club kept great roots blues playing over the speakers until it was time for the band to come up on stage. As I have discussed earlier, C3 is a blues power trio, with a repertoire that stretches from blues to funk to soul. Their performance on this particular night was augmented by a guest harmonica player that sat in, a visiting drummer that gave Courtney Brown a breather, and a superb female singer that closed out the night with a rousing rendition of Aretha Franklin’s “Chain of Fools.” It was definitely a night to remember in Jackson, and West Alley BBQ will be a place to keep checking up on.


Memphis is literally loaded with incredible soul and funk bands, and occasionally local restaurants and clubs feature some of them. Joshua McCain and the Soul Seven have recently started playing every Tuesday night at El Toro Loco in Hickory Hill from 7-9 PM, with singer Jay Bailey as their featured vocalist. I like to come out and support live music, and it is especially enjoyable to have a live music event early in the week.

Memphis traditionally has had a nightlife drought on early weeknights, especially Mondays, so the weekly industry night with Cameron Bethany and his band on the patio at Bar Louie is welcome. Cameron Bethany is an amazingly-talented Memphis soul singer, and he was backed by two of Memphis’ best young musicians, Claude Hinds on keyboards, and Shawn “ILuvDrums” Payne on the drumset. The weather was perfect out on the patio, and the music was first-rate, funky and soulful. I might add that Bar Louie has some of the best hamburgers in Memphis.

One of the best things about the Cutting Edge Music Business Conference is that it is held in New Orleans, which is one of the most musical cities in the world. Live music seems to be everywhere, such as the Gazebo Cafe patio in the French Market, which features live jazz and blues groups from noon until 6 PM each day.

The Jack Rowell Jr. Blues Band is one of Memphis’ best-known blues bands, with a long-standing Thursday night gig at T. J. Mulligan’s in Hickory Hill. At this year’s Memphis Music and Heritage Festival, I noticed that the band featured my homeboy Cedric Keel on drums, and his solo toward the end of the set enthused the crowd.

I ate lunch at Pearl’s Oyster Bar downtown, and then headed out to Southbrook Mall, because my homeboy Snipes said his band A Touch of Soul was performing in the parking lot for the opening of some sort of discount mall there. A Touch of Soul proved to be a very talented young band, with a drummer named Otis Logan whose solo was one of the high points of the concert. Several rappers and singers performed with the band during the course of the hot summer afternoon.

Memphis drummer Mike Mosby and his band the Hard Hitters take solos on an extended jam at the birthday celebration for Memphis singer Cameron Bethany at Onix Restaurant in the South Main Arts District.