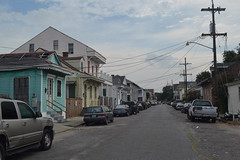 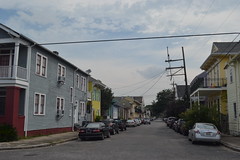 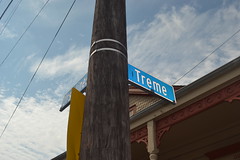 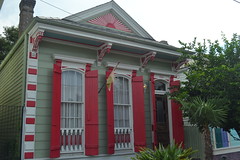 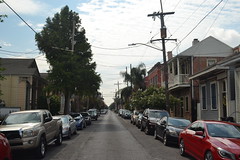 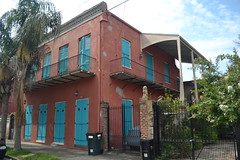 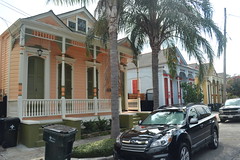 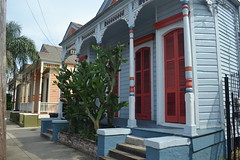 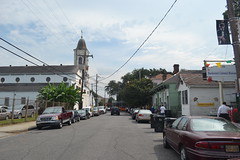 Each year on a Sunday, usually in August, the Satchmo SummerFest sponsors a second-line that runs from the St. Augustine’s Church in the Treme neighborhood to the Old U.S. Mint in the French Quarter, featuring Indian tribes, brass bands, the Baby Dolls and various social aid & pleasure clubs. This year’s second-line was scheduled to start at 12:30, and I thought it would start on time, so I felt I didn’t have time for a leisurely breakfast down in the city, and I grabbed a quick breakfast near my hotel at the Tic Toc Cafe in Metairie. With the parking situation so expensive and limited in and around the French Quarter, I decided to park my car up in Treme, close to the start of the parade route, and, fortunately, I had no problem finding a place to park near the Treme Coffeehouse. It was already extremely hot outside, so I grabbed an ice coffee from the coffeehouse, and then started walking down towards the church where the second-line would be starting. Like many other mornings when I had been in the neighborhood before a parade, the Treme was calm and quiet, but with a sort of eager anticipation in the air as well. 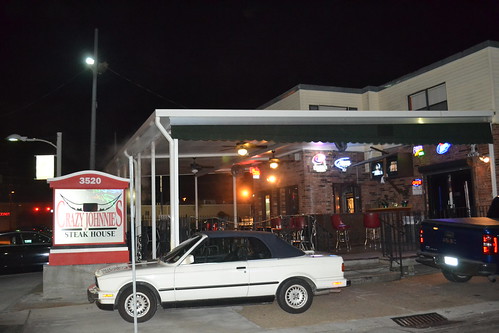 As I came into New Orleans for the Memorial Day weekend, my plan was to head to a new burger joint called Fire House Burgers in Metairie, a new concept from the folks at Drago’s Seafood Restaurant which had opened in January. Drago’s is great, and I had imagined that their burger offshoot would be too, so one can imagine my surprise at finding the place closed and evidently out of business after less than sixth months. With it already being 9 PM, my choices were somewhat limited. Drago’s has great seafood, but I had set my heart on beef, so I decided to try the place across the street, Crazy Johnnie’s Steak House, which had gotten reasonable reviews on Yelp and which I knew had been around since the 1970’s.
Crazy Johnnie’s is unlike any steakhouse I have ever been in before. It is basically a bar, and a dive bar at that. Its steak menu grew out of a “Steak Night” bar promotion, and has always featured steaks at far below standard pricing, such as the $17.95 filet mignon that I decided to try (you’ll likely pay that much for a burger these days at some of the more trendy New American bistros). Frankly, the filet mignon was well-seasoned, cooked to perfection, thick and juicy, better than its more-expensive equivalents at Longhorn or Outback, and it actually came with a side dish as well. When my waitress told me that Crazy Johnnie’s had no french fries or baked potatoes, only mashed potatoes called Crazy Potatoes, I was briefly disappointed, at least until my food arrived. I don’t particularly like mashed potatoes as a rule, but these were amazing and tremendous, cheesy and buttery, with garlic and herbs and bacon, and a bit of a hot kick that was hard to identify. And I have to add that as I was enjoying all of these culinary delights, great Louisiana R & B was playing from the speakers overhead. The place I had settled for as a backup proved to be a stellar food experience.
If you’re hoping to experience Crazy Johnnie’s, now is the time to act. The restaurant’s owners threatened to close down in 2013,due both to age and the rising price of beef, but public response took the form of a massive increase in business, so they decided to stay open for the foreseeable future, but they should not be taken for granted. The next time you’re in the New Orleans area, make it a point to eat there.


After my dinner at Acme Oyster Bar in Metairie, I headed across the street to something called the New Orleans Coffee & Beignet Company, which was just about to close but hadn’t closed yet. Having tried Morning Call and Cafe du Monde many times, I was eager to see what was different about this newer place, and I soon found it, in the form of a sign on the wall: “Home of the original Chocolate beignet.” Well, perhaps the only thing I like better than beignets is chocolate, so I had to try it. How was it? Decent. What was it? Basically some beignet dough to which had been added Hershey’s cocoa powder. Nothing all that fancy, but good nonetheless. So all in all I was pleased. The beignets are good, the cafe au lait was good, the parking is free. What didn’t I like? They close at 10 PM. If only they were open 24 hours a day!


After the second-line, I was both hungry and exhausted, but food was harder to find than you might think. New Orleans is still a bit of a strange place on Sundays, and more restaurants are closed on the Sabbath than you would expect in a city known as a party town and convention place. After running by several places which proved to be closed, I found myself out on Veterans Memorial Boulevard in the suburb of Metairie, and came to Don’s Seafood Hut, the New Orleans branch of a Louisiana chain based in Lafayette. One of the surprising things about New Orleans is that while seafood is ubiquitous and plentiful, most of it is fried, and Don’s is no exception. I had a catfish and fried shrimp combo, and was very impressed with what I got. Next door is the legendary Gambino’s Bakery, which is famous for, besides po-boy bread, king cakes, which are a big deal at this time of year. Yet I resisted the temptation to stop there, and headed back into the city.


Breakfast was at Panera Bread, and then I headed out to New Orleans for the Cutting Edge Music Business Conference, but I stopped in Jackson to have lunch with Charlie Braxton at Majestic Burger, and to pick up the new Ned Sublette book about New Orleans at Lemuria Books.
All the time I had spent in Jackson had me running behind schedule, but I got so sleepy south of Jackson that I had to stop in Brookhaven for a cappuccino.
The New Orleans rap artist Ms. Tee had wanted to meet with me, so when I got across the swamps and past Manchac and LaPlace, I called her from the outskirts of Kenner, and she suggested that we meet at Copeland’s Social City in Metairie. I had no trouble finding it, but, unfortunately, the menu had changed since the last time she had been there, and it was not only expensive, but just weird. mostly small plates, the tapas menu that’s so trendy nowadays in places like Los Angeles or New York. This was New Orleans, however, so we decided to drive further down Veterans to the Copeland’s Cheesecake Bistro, which was a much better and more diverse menu. We talked, some things about the city’s rap scene, and some about her career, and then went our separate ways, me out to the part of Metairie that had once been called Fat City in search of beignets.
Tucked behind the Lakeview Mall, it was hard to see how the nondescript strip malls facing each other had ever been intended to rival the French Quarter, but that’s what the developer who built them had bragged back in the early 1970’s when school integration had started in earnest, and whites began pouring out of Orleans Parish into Metairie like water flowing through the broken levees. Businesses flowed over the line as well, one of them the venerable old Morning Call coffee stand that had proudly stood in the French Market for 103 years, a block northeast of its more-famous competitor, the Cafe Du Monde. When it left the Quarter for Metairie in 1974, people began to realize that something was truly going wrong in New Orleans. Officially the move had been due to “street construction”, but the truth was, most of the place’s long-time customers had probably moved already. Nowadays, Fat City was a garish warren of outdated strip malls with old-fashioned neon signs, and the only thing that seemed “fat” about it might be the beignets at Morning Call. But the coffee stand still proudly advertised that they were open”24 hours”, and they were crowded (with locals, not tourists). The prices were slightly cheaper than the Cafe Du Monde, and I noticed that they didn’t dust the beignets with powdered sugar, but had canisters of powdered sugar on every table for you to do it yourself. From there, I took a spin through West End Park, where I had eaten on an enjoyable promotional trip back in the summer of 2005 before Hurricane Katrina. Although the Joe’s Crab Shack had been rebuilt and opened as a Landry’s Seafood House, the rest of the area was still strangely desolate. Peculiarly, the sand volleyball courts were still there and apparently had been rebuilt by the city, but there was not a trace of the four or so restaurants that sat in a circle at the western end of West End Park the last time I had been there. I felt rather depressed as I headed down Pontchartrain Boulevard and into the city, whose broad expanse of downtown towers suggested a place of infinite wealth and possibility. Any illusions were soon shattered when I exited onto Canal Street, passing an abandoned hotel, three abandoned movie theatres and a vacant office tower with shattered windows, although the street had been planted with rows of beautiful royal palms, and the street’s condition seemed to improve with each block as I drove nearer to the river. The hotel where my conference was being held was the Westin Canal Place at the very end of the street, and after I had checked in, I decided to call it a night. My room featured a window with a broad expanse of the city, looking eastward toward the Faubourg Marigny and across the river toward Algiers. Off in the distance to the east, I could see the flash of radio towers, maybe out at Michoud, and nearer, I could see a big boat negotiating the Mississippi, perhaps an oil tanker. I left the window open on the city and fell asleep on the plush bed.