Going the I-10 route through Houston as I did meant that I didn’t get into Austin until 4 in the morning on Monday, so it was nearly noon when I woke up on the first day of my South By Southwest week. After a breakfast at Jim’s, I headed over to one of my favorite Austin neighborhoods to do some record and book shopping. The North Loop neighborhood is a small stretch of funky boutiques and shops with really cool things like vinyl records, vintage clothing and books. Monkeywrench Books is a cool, left-wing bookstore with a lot of books that aren’t available elsewhere, like the really cool book I found, Michael P. Jeffries’ Thug Life: Race, Gender and the Meaning of Hip-Hop. Down the street is Breakaway Records, arguably Austin’s best vinyl store, with an emphasis on 45-RPM vinyl singles, and fairly low prices. Breakaway also sells stereo equipment and accessories. In the same shopping center is Epoch Coffee, a great place to relax and chill after an hour of strenuous vinyl shopping. I’m not even sure what is in an Iced Mojo, but it is truly amazing.

The North Loop neighborhood is located along North Loop Boulevard between Lamar and Airport Boulevard in North Austin. 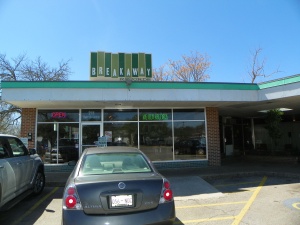 I first discovered Breakaway Records when it was on Fifth Street in East Austin. That was my first long-term visit to Austin, and my first South By Southwest ever, about five years ago, and the store, tucked into a shady grove beside a small cafe was a welcome find. The place was a treasure trove of rare 45’s, not only from Texas, but from Louisiana, Memphis and elsewhere. If the selection was surprising, so were the prices, shockingly low considering the rarity and quality of the records. East Austin’s ever-spiraling rents probably motivated the move to North Loop, but nothing else has really changed at Breakaway. The tastes still lean toward funk, soul and jazz, there are still headphones and turntables to try records out before you purchase, and the prices remain far below peer stores in the Austin area. The main differences (good ones) are the increase in available parking, and the proximity of Epoch Coffee, because there’s nothing like a good cappuccino after an hour or so of vinyl digging. Breakaway Records is at 211 W North Loop in Austin, Texas. Their phone number is (512) 538-0174. 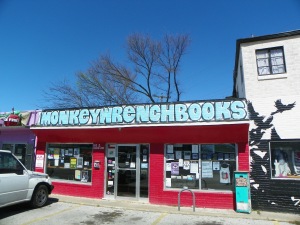 MonkeyWrench Books is a collective that runs a left-wing bookstore in Austin’s ultra-hip North Loop neighborhood (Well, really, what Austin neighborhood ISN’T ultra-hip?). The average conservative will hate this place, but there are plenty of books on African-American and Hispanic struggle, workers’ struggles, anarchism, socialism, communism and environmentalism. Many of the books I saw here I have not seen elsewhere. They are open from 11-8 weekdays and from 12-8 on weekends at 110 E North Loop. You can call them at (512) 407-6925.