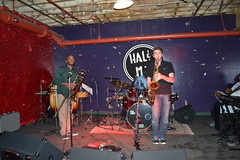 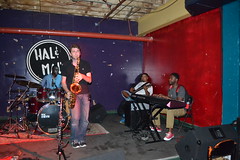 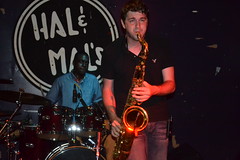 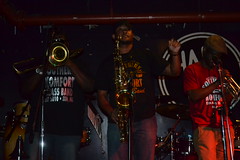 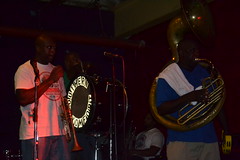 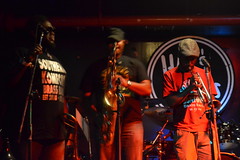 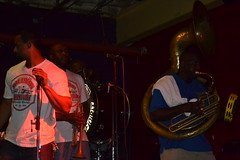 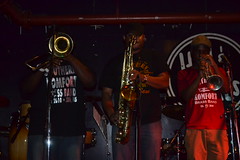 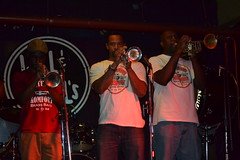 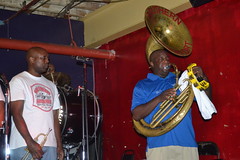 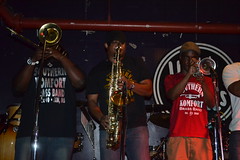 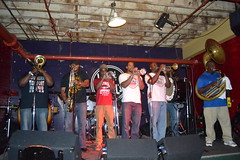 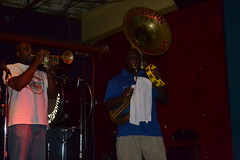 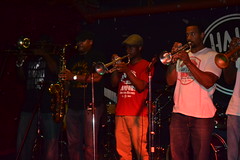 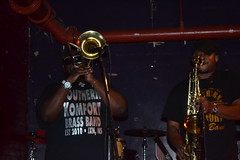 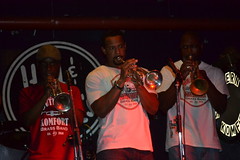 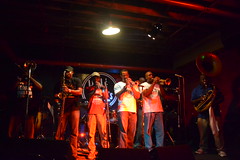 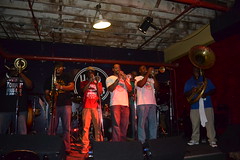 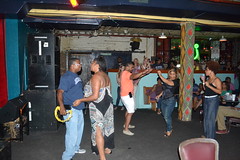 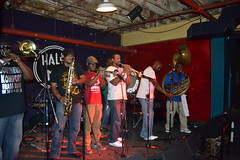 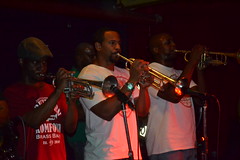 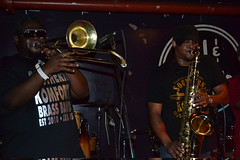 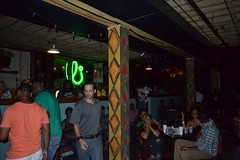 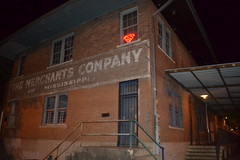 After dinner, the Core DJ Retreat had another party, but it was at a strip club in South Jackson, and I don’t go to strip clubs, so I decided to head over to Hal & Mal’s, where the Southern Komfort Brass Band was scheduled to appear. I had heard this band at Underground 119 last year, and was quite impressed with them, as they are one of the few brass bands not from New Orleans to measure up to the standards of that city’s brass band tradition. I had not expected an opening act, but saxophonist Ryan Raziano proved to be a decent contemporary jazz musician, and his backing band was first rate indeed. Of course, the Southern Komfort Brass Band rocked the house, just as they had last year, and while they played some familiar brass band standards like “Do Whatcha Wanna”, they also played some tunes I have never heard done by a brass band, such as Sade’s “The Sweetest Taboo.” After a rousing set of music, they were followed by Jackson saxophonist Ezra Brown, who was celebrating his birthday. But I wanted to catch Dexter Allen at F. Jones Corner, so I headed out.

A good example of how the Southern Komfort Brass Band fuses New Orleans’ tradition with that of Mississippi is this cover of R. L. Burnside’s “Coal Black Mattie” at their gig at Underground 119 in downtown Jackson on 4/19/13

The Southern Komfort Brass Band performs a combination of the Isley Brothers’ “Between the Sheets” and Notorious B.I.G.’s “Big Poppa” at their gig at Underground 119 in downtown Jackson, Mississippi 4/19/13

The Southern Komfort Brass Band performs for the crowd at Underground 119 in Jackson, Mississippi on Friday 4/19/13

One of the trademarks of the Southern Komfort Brass Band is their tendency to do classic songs and then interpolate the rap song that used the older song as a basis, as they did here with Dennis Edwards’ “Don’t Look Any Further” and Eric B. & Rakim’s “Paid In Full.”

When I saw that something called the Southern Komfort Brass Band was playing at Underground 119 in Jackson, Mississippi, I decided to drive down from Memphis to check them out, since I didn’t have a gig myself. I had no trouble finding a place to park in downtown Jackson near the venue, but I was in for a shock when I walked the block up to Underground 119, because I soon found that the place was already at capacity and was only admitting people as others left. I began to fear that I had driven all the way to Jackson for nothing, but eventually a group of about five people came up the stairs and left, and I was able to get inside. The venue was in a basement underneath an art gallery on President Street, and was packed with people beyond belief. There were no chairs available, and I could only stand, which, in fact was better because the standing area was directly in front of the stage where the band was playing. The Southern Komfort band was founded in 2010, and is apparently a mixture of native Jacksonians and some displaced New Orleanians who settled in Jackson permanently after Hurricane Katrina. Like the better known New Orleans bands, they take the youthful, hip-hop street approach that sets the current generation of brass bands apart from the older New Orleans jazz tradition. New Orleans brass band standards, Marvin Gaye tunes, Isley Brothers songs, even Z. Z. Hill’s “Down Home Blues” and R. L. Burnside’s “Coal Black Mattie” were transformed by the band’s Caribbean-like percussion rhythms into music that packed the dance floor. Stopping only for a couple of breaks, the band finally ended their final set at 1 AM, and I was sorry to see it come to an end.
Widgets