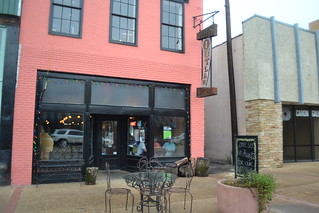 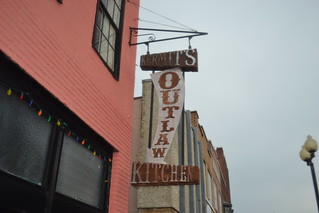 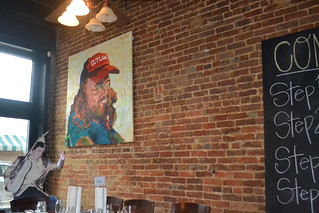 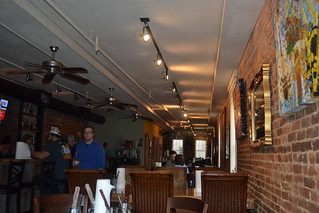 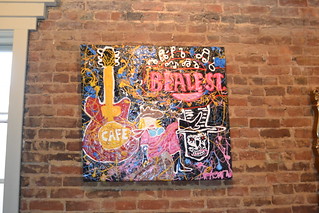 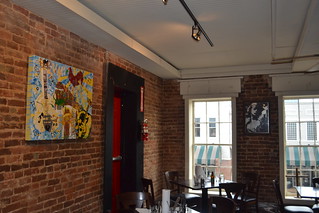 Tupelo, Mississippi has always had a big-city ambiance that belies its relatively small size. It has a large regional mall, its own TV station, a zoo, a large convention center and arena and a fairly big downtown, complete with tall buildings. Now, Tupelo also has a big-city steakhouse called Kermit’s Outlaw Kitchen on Main Street downtown, opened by the same people who run the Neon Pig in North Tupelo. KOK is not just a great steakhouse with great food and an attractive ambiance, but it is also a burgeoning part of the locavore movement, a trend toward restaurants locally sourcing almost everything. A wood-burning pit downstairs fills the restaurant with an inviting aroma, and this is where steaks are grilled and shucks of corn are roasted. My expertly-cooked filet mignon was accompanied by fingerling potatoes, which were delicious, and I had substituted a husk of roasted corn (also amazing) for the vegetables. The large upstairs dining room is bright and cheerful, with local art works on the walls and plenty of windows, but there is also seating around a downstairs bar near the pit. Although I’m not a beer drinker, there is a decent selection of craft beers, many of them regional, for those who like that sort of thing. Altogether, I had a great meal and good fun at Kermit’s Outlaw Kitchen, and will certainly be back.