Atlanta rapper Renegade El Rey is originally from Memphis, Tennessee, and was the first artist to perform at The Real A-Town concert at the Loft in Midtown Atlanta on Friday, October 10th. Although relatively young in the music industry, Rey has collaborated with a number of better-known rappers and producers, such as Fiend, and is starting to make a name for himself. 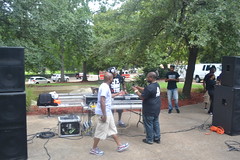 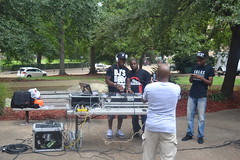 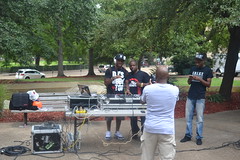 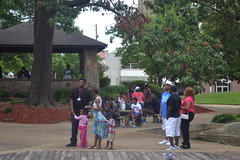 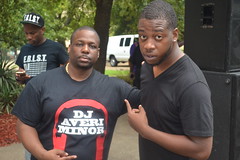 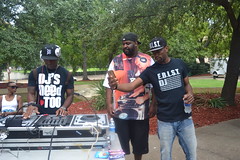 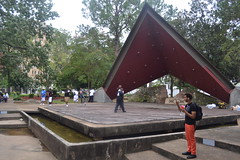 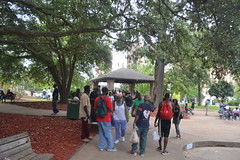 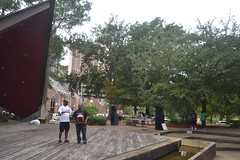 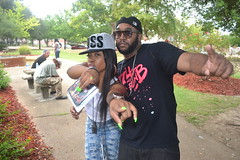 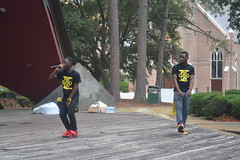 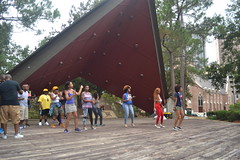 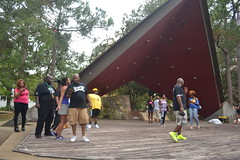 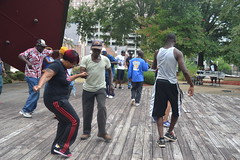 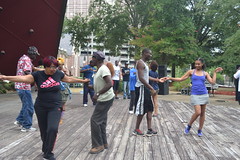 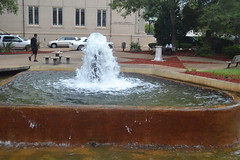 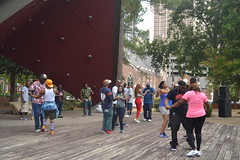 While the media turns its huge spotlight on hip-hop whenever something tragic, criminal or salacious happens, they are conspicuously absent when rappers and people in the hip-hop industry do something positive, which happens all the time. On Sunday morning, the third and final day of the Core DJ Retreat in Jackson, Mississippi, conference attendees turned out en masse to feed homeless people in Jackson’s Smith Park, an urban park near the conference hotel that literally sits a block from the Mississippi Governor’s Mansion. It is disconcerting that Jackson has a severe problem with homelessness, but I suppose all cities do these days. At any rate, we brought food, but we also brought our DJ’s, and thus music and dance. Hopefully, we not only nourished bodies but also refreshed spirits as well. 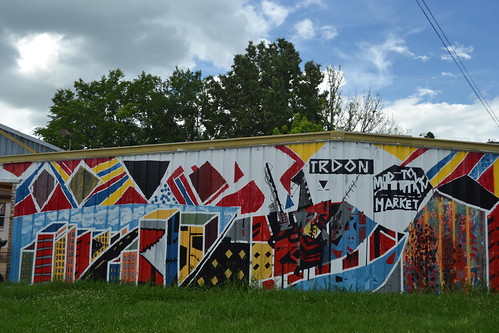 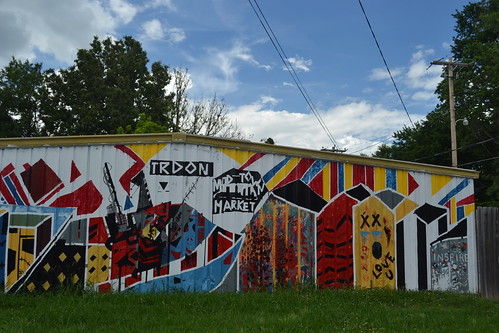 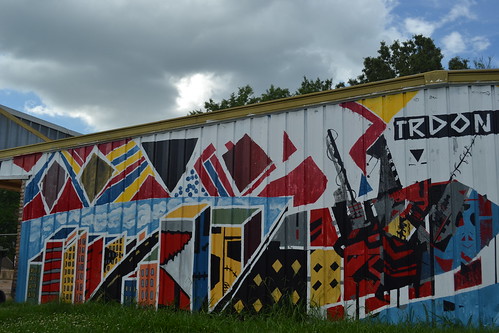 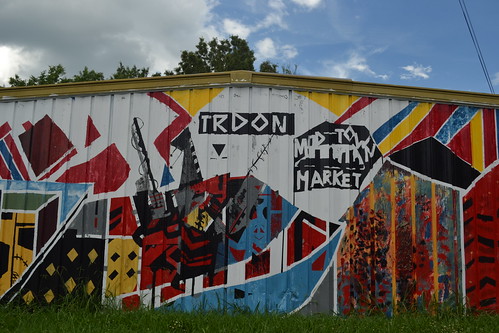 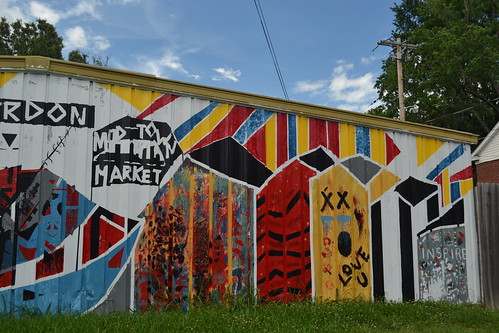 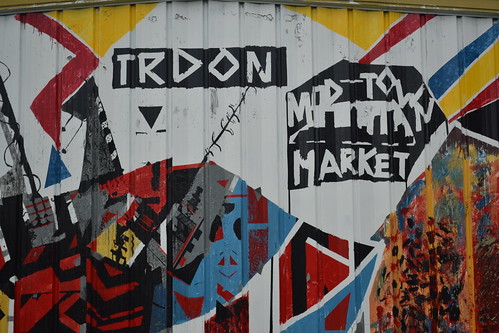 Memphis rap artist Preauxx and his friends painted this brightly-colored mural on the wall of the Midtown Market in the Cooper-Young neighborhood of Memphis. The mural was used in a video, and the convenience store’s parking lot has actually been the venue for concerts in Memphis.


Bristerfest is a Memphis festival of music, art and film that raises money for Grow Memphis, a worthwhile organization that encourages neighborhood gardens in the inner city of Memphis. Formerly held at the Levitt Shell, Bristerfest moved this year to the former church-turned-performance loft called The Abbey at Cooper and Walker in the Cooper-Young neighborhood of Midtown, and featured two indoor stages and an outdoor stage over three days in May the weekend after Beale Street Music Fest. I was especially impressed by the rap and hip-hop line-up on Saturday night May 10, where C-Beyohn performed with the excellent reggae band known as the Chinese Connection Dub Embassy. They were followed by up-and-coming Memphis rap artist Tyke T backed by drummer Otis Logan and trombonist Suavo J of the band 4 Soul, and the young hip-hop duo S.O.U.L. that has been getting some attention locally over the last year. I must add that attendance seemed very good indeed for this year’s Bristerfest, and hopefully a lot of money was raised for Grow Memphis.

1884 Lounge at Minglewood Hall was the scene for the Saturday night rap showcase during the 15th Annual On Location Memphis International Film and Music Festival in Midtown Memphis. Acts on the stage included D’Mario, Abe, a Memphis rapper who is producer H. Potter’s brother, veteran Memphis rapper Dulaa whose recent work takes on a strong country influence, St. Louis rap artist Peetey Weestro who has been getting some attention with his single “Pull Up, Shut It Down”, and Memphis conscious hip-hopper Preauxx, whose label and publisher Great South Bay Music was the sponsor of the showcase.

The 15th annual On Location Memphis Film and Music Festival got underway in earnest on Friday April 25 with the awards luncheon at Lost Pizza Company on Poplar Avenue. Folk acoustic duo Sunburnt Moon providing the really cool music for the occasion. Registration then opened at Studio on the Square in Overton Square around 1 PM, with films occurring all afternoon. At 7 PM, music showcases got underway at Le Chardonnay, The Blue Monkey, Otherlands, Java Cabana and Newbys, and these ran until midnight. Highlights of the evening included performances by Mike Mosby and the Hard Hitters Band featuring vocalist Cameron Bethany at Le Chardonnay, Cowboy Bob Sawyer and Low Society at Otherlands, and an all-star hip-hop line-up at Newby’s that included Marco Pave, 5th Child, Truth Universal, Marcel P. Black, Lyriqs Da Lyraciss, Lukah Luciano, A. C. Dutch and the Iron Mouth Battle League and Knowledge Nick, who was also the MC for the evening.

Memphians have been enjoying Thursday night parties in the warm weather months for several years now, both on the rooftop of The Peabody Hotel, and more recently on the rooftop of the Madison Hotel. Now a third series of parties and concerts has been launched at the new Tower Courtyard in Overton Square, known as Thursdays on the Square. The inaugural event was held on Thursday April 17, featuring performances by Memphis blues queen Ruby Wilson, Al Kapone (who led the crowd in a chant of “Whoop That Trick” for the Grizzlies), and indie artist Free Sol. Several hundred people attended, and the event will be held every Thursday night through the end of August. Admission is $5.

To be a moderately-sized city, Lafayette has a fairly large number of music stores, including two independent record shops owned by the same owner. The E & S Music & Video Store is owned by the same owner as House Rockers, and specializes in rap and R & B music. Unfortunately, when I swung by there on Friday morning, they hadn’t opened yet.


Lafayette’s Northgate Mall is a dying mall, if not a dead mall, which is somewhat peculiar, as it is much closer to I-10 and I-49 than is the Acadiana Mall on Johnson Street which has fared so much better. But aside from a couple of hip-hop clothing shops and a barber shop, the one thing that keeps people going to Northgate Mall is Lafayette’s venerable House Rockers Record Shop, a neighborhood institution where people come for zydeco, soul, blues, gospel and local hip-hop. At a time when so many record stores are closing, House Rockers seems to be thriving, even in a mall that isn’t.


There are cities larger than Lafayette, Louisiana that don’t really have a decent sneaker boutique, but fortunately Lafayette has one of the South’s best, a store with the unlikely name of Politics. Politics has the T-shirt lines you would expect, like The Hundreds and 10 Deep, and shoes for any color scheme, but they also have lots of local mix CD’s, many of which are free for the asking. From their base in Lafayette, Politics has now branched out to New Orleans and Baton Rouge, and is planning a different kind of more upscale clothing store in Lafayette as well. Politics is definitely worth a visit anytime you’re in Louisiana.